Taylor Swift proves that a young person can achieve big things.  In spite of all her accomplishments, she remains down-to-earth.  She believes she owes everything to her fans and she stays accessible to them by social media and talking with them one-on-one after performances.  Her life experiences are woven into all of her songs and her fans feel like her songs could be about their own experiences.  She began singing, acting and writing early in her life because she loved them.  She won a national poetry contest in the fourth grade which naturally led to songwriting.  She also showed business sense at a young age.  When she was eleven, she and her family traveled to Nashville where she took homemade CDs of her singing karaoke and she dropped them off at record label offices.  No one called, but she proved she was persistent.  When she was fourteen, Taylor was offered a contract with RCA.  She tried working with them for a year, but she felt they wanted to categorize her so she walked away from renewing her contract.  She played everywhere she could and after one performance, a man approached her.  He wanted to start a new record label and he wanted to sign her, promising her she could sing her own songs and follow her artistic vision.  It was a good collaboration.  She sold million of recordings, began winning awards and shooting up to the top.

This easy-to-read biography is full of quotes and personal stories, analyzing the different aspects of her successful career.  Readers will enjoy the many color photos.  The reading level makes this a good choice for a Powerpoint presentation or an audio book.  The publisher’s website has Core Curriculum literacy activities for another book in the series, but it could easily be adapted to use with this book: (http://www.enslow.com/product_images/worksheets/EducatorsGuide/9781598452853_tg.pdf). 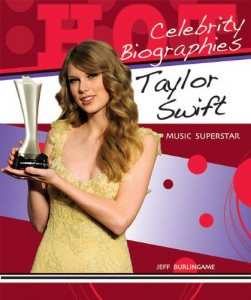